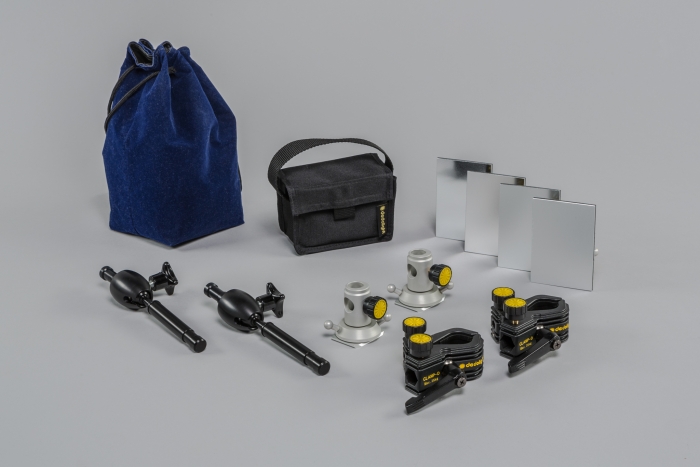 The high efficiency of these reflectors within this system derives from reflective values, where approx. 95-98% of the light can be effectively reflected. When used with Parallel Beam adaptors the quality of the light and shadows become uniquley realistic

Reflector #1 is the closest to a very hard reflector, but it is not a mirror. A fully functional mirror usually would not work well for this kind of lighting system, it would not redirect the incoming light, the beam with sufficient homogeneity.

Reflector #1 serves the purpose of redirecting the light without changing the beam size and the beam character. The attempt here is to cause a minimum of stray light and a minimum of diffusion. This surface structure provides reflection with an exit angle of about 4°.

Reflector #2 shows less light intensity at the object, although the total amount of reflected light remains pretty much identical with 95-98%, but due to the wider exit angle of 12°, it makes it more suitable when we want to arrive in the next reflection from the secondary reflector with a larger surface.

Reflector #3 appears to be much gentler, although again the same amount of light gets reflected, but spread over an angle of 50°.

Reflector #4 produces seemingly the most gentle reflection, covers an angle of 95°, and thus, lower values of light level reaching the object, and the virtual light source now, coming very close to the reflector surface, only 4cm behind the reflector.

When comparing Lightstream reflector #4 with the commonly used styrofoam, we have comparable values of light intensity reaching the object. Thus, we now have to assume that the theory and practical function of the virtual light source, as generated by reflector type #1, may drastically change the influence of the square law, minimizing the differences in exposure value, when our talent is moving.

This effect is minimized when we use reflectors #3 and #4, or a styrofoam.